Tip of the Week: Yoga vs Calisthenics

Calisthenics is a form of exercise involving a number of rhythmical movements and stretches, generally without using equipment or apparatus. It is intended to increase body strength and flexibility with movements using only one’s body weight for resistance.  When performed vigorously and with variety, calisthenics can benefit both muscular and cardiovascular fitness, in addition to improving psychomotor skills such as balance, agility and coordination.

So what's the difference between calisthenics and yoga?

As Tom explained in class the other night, yoga differs from calisthenics in that you go into each posture slowly, you find your max, breathe, then come out of the posture more slowly than you went in.

Think about this carefully the next time you are coming out of a posture. In Standing Head to Knee Pose, for example, you will hear the teacher tell you to reverse each step as you come out of it. Take the time to come out of each step of the posture as slowly and carefully as you went in.

Remember to keep your focus on your breath, and always come out of the postures slowly.

Posted by The Baumanns at 5:09 PM 0 comments

Tip of the Week: Don't Do the Half Moon Crunch

Half Moon Pose is NOT just a bend to the side.

Instead of focusing on only bending the upper body to the  side, focus more on pushing the hips in the opposite direction. If you only bring your upper body down to the side and leave your hips directly over your feet, you are crunching your side instead of creating a nice open C-shape.

Once you reach alignment with your hips square to the mirror, only focus on moving your hips to the side. You want to push your hips so much that they go further out past the sides of your feet.  If you only think about bending more at the waist you are not opening up the intervertebral discs. By focusing on moving your hips further out past your feet, you continue to lengthen and open up the body, giving more space between the vertebrae.  This will make the opposite side compress more and bring your upper body down naturally. Your arms and hips will pulling in opposite directions.

The “push, and push” at the end of Half Moon is intended to make the hips push out, not just push the body down more. By pushing the hips out, the body automatically has more room to bend while maintaining core strength.

In the photo below, she is mostly trying to bend her upper body to the side, and isn't pushing her hips in the opposite direction. She isn't able to fully lengthen and open up her body.  (As a side note, her arms also aren't touching her ears, and her feet aren't together. For more info on alignment in Half Moon, click "here".) 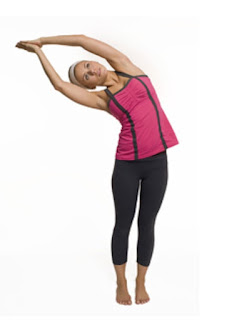 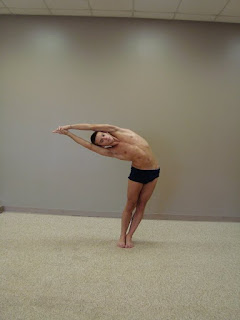 The photo above shows nice alignment with the hips pushing far to his left, further out past his feet, causing a nice open C-curve in his entire body.
(photo from Bikram Yoga Los Angeles)

Tip of the Week: Yoga for Insomnia 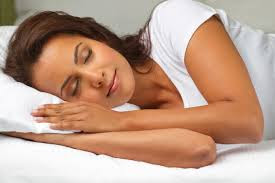 Maybe it's indigestion, something you ate that now torments your stomach and keeps you tossing and turning. Maybe it's overstimulation from drinking caffeine during the day, or just the garden-variety stress of 21st-century life--mental indigestion--that's got you up at night. All of these reasons add up to more than 35 million prescriptions a year in the United States for sleep medications.

Throw away those pills with their risk of dependency and bizarre side effects. Did you know that some people actually get up in their drugged sleep and eat like pigs or even drive their cars while they're on these medicines? Now that's a nightmare.

Yoga is the natural, effective prescription for insomnia. How does yoga prevent insomnia?


Rabbit pose is especially good for insomnia; however, your overall comprehensive practice is the best cure for any and all sleep disorders. Besides all the scientific reasons I cite above, giving your best effort in my heated Torture Chamber will definitely kick your butt! After that, you will definitely sleep. Sweet dreams, my friend.

From Bikram Choudhury's book "Bikram Yoga: The Guru Behind Hot Yoga Shows the Way to Radiant Health and Personal Fulfillment"
Posted by The Baumanns at 9:42 PM 0 comments

Tip of the Week: Backbend During Standing Bow Pulling 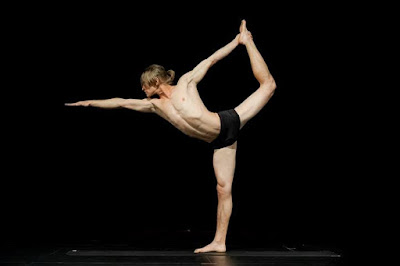 Oftentimes when students go into this posture, they bring their chest and abdomen straight down, making their back straight. In fact it pretty much looks like Balancing Stick with a leg up in the air.
What you have to do first and foremost is work on the biggest deepest backbend you can muster.

1) After holding your leg in your hand bring your knees back together. Your shoulder will drift a little behind you
2) Bring up the other arm straight and strong, palm facing forward
3) Your hips are square and your shoulders are already starting to orient themselves one behind the other
4) Inhale stretch up as high and as strongly as you can, and on the exhale…
5) Kick the foot back into your hand, kick your knee up to the ceiling AND
6) DO NOT move your arm or body one little bit. They will move by themselves as you kick. But let the kick drive the pose. Let the shoulder get pulled back by the force of the kicking leg.
7) The whole time try to touch the ceiling with your front arm. You won’t be able to of course, but the action of this will help you create a better backbend.
8) Your back stays up. As you kick up your belly will come down all by itself. But try to keep the chest up as high as possible.