Tip of the Week: Adapt to Your Challenges

Whatever your views are on yoga competitions, the feeling of inspiration will be undeniable after reading about a couple of these determined yogis. Both were awarded first place in the women's division for their state in the USA Yoga Mountain States Asana Championship.

Kira Brazinski, who has a prosthetic leg, hopes to motivate someone who may have lost a limb or who has a disability to try yoga. "For me, really for everyone, yoga is about modifying and adapting to your body's strengths and challenges."

Our very own teacher Charese Peterson, from Utah, in the past had struggled with addiction to painkillers and had insomnia and anxiety prior to practicing yoga. "It's not a competition to prove you're better than someone. It's more to spread awareness for yoga, and you never know who you may be saving."

The full article from Jackson Hole News & Guide is below:

A contest with a greater purpose 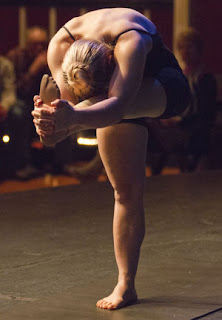 Posted: Wednesday, February 3, 2016 4:30 am
By Frances Moody
Gasps of astonishment echoed from the walls of the Pink Garter Theatre on Saturday when Kira Brazinski lifted her prosthetic leg toward the ceiling to complete adho mukha vrksasana, the Sanskrit name for a yoga handstand pose. In fact, the final posture the Jackson resident assumed during the USA Yoga Mountain States Regional Asana Championship earned her a standing ovation and first place in the women’s division for Wyoming.

One person who rose from his seat was judge Abhinav Sagar, who said Brazinski’s strength and determination defines yoga.
“It was beyond imagination,” Sagar said. “It really touched me. I had never seen something like that before.”
Sagar believes that yoga competitions are about connecting the mind, body and spirit in order to inspire. He surely felt inspired by Brazinski.

The champion, however, had a different opinion about yoga competitions when she first heard one was going to be hosted in Jackson.
“It seemed like it was defeating the purpose to make yoga, which is something focused around acceptance and nonjudgment, competitive,” she said.
Once she got on stage to execute six asana postures in three minutes, Brazinski had a change of heart.
She realized it wasn’t about proving she had more talent than the other competitors. It was about encouraging audience members to hit the mat to try their hand at the discipline.

Brazinski, who was born with one leg shorter than the other, hopes that her demonstration Saturday will motivate someone who may have lost a limb or who has a disability to try yoga, which she says is a practice anyone is capable of doing.
“For me, and really for everyone, yoga is about modifying and adapting to your body’s strengths and challenges,” the competitor said.

Brazinski, who teaches at Inversion Yoga, wasn’t the only one who participated Saturday with hopes of motivating people to try yoga. Charese Peterson, a competitor from Ogden, Utah, who finished her three-minute routine in a deep backward bend known as full camel pose, wanted people to witness how yoga had helped her.
“I was struggling with years of addiction to painkillers,” Peterson said, “and I had anxiety and insomnia.”

After the winner of the Utah Division started practicing yoga on a regular basis she no longer felt she needed to take painkillers or antidepressants.
Like Branzinski, Peterson feels that yoga competitions have a larger purpose.
“It’s not a competition to prove you’re better than someone,” Peterson said. “It’s more to spread awareness for yoga, and you never know who you may be saving.”

Dien Huynh, Colorado’s first place winner, said he participated in the championship to connect with the yoga community.
“It’s awesome to go back, meet new people and mesh in with the community,” Huynh said. “It reinvigorates me and motivates me to set goals for my practice.”

He also learned quite a bit from yoga. Huynh said he never thought he was capable of doing a split, but yoga taught him that his body can do much more than he originally thought.
For his last posture Saturday, Huynh completed the standing splits.
Though all contestants were judged on strength, flexibility and balance, Sagar said that the competitors’ willingness to participate made everyone a winner.
“They all won because they already overcame so much just by signing up,” the judge said.
Posted by The Baumanns at 8:54 PM