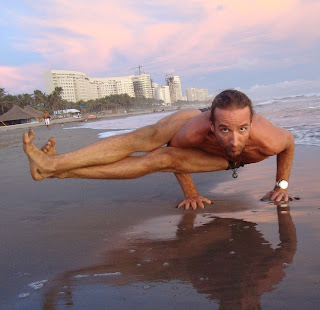 For those of you who haven't met Marc yet, he is a new instructor at Bikram Yoga SLC! He's come a long way since a severe motorcycle accident, including getting 1st place in the men's division in this year's Regional Yoga Asana Championships. The following is his motivating story.

Adversity comes to all.  It is part of life.  But, hearing about adversity is, for the most part, neither very interesting nor instructive.  However, a story about adversity overcome is exciting and most instructive.  Marc Linton's is such a story.
In a severe motorcycle accident in August of 2002, Marc suffered multiple injuries that included compression fractured vertebrae, extensive soft tissue damage, a fractured skull, and serious neurological damage.  "Before the accident I was already dealing with anxiety and depression issues.  "The brain injury compounded the anxiety and depression and caused memory issues, agoraphobia, and socialization problems.  "I felt absolutely overwhelmed by it all.  "I was collecting Social Security disability, was on six different medications and was at the end of my rope. I wasn't healing, I was just more and more medicated, and the bills were piling up.  "In desperation I decided I needed to try something different and one doctor had told me that yoga gave him relief from his back pain.  "My first practice at Bikram Yoga I was completely overwhelmed, nauseated, dizzy and spent most of the class laying on the floor.  "However, after class was over I experienced a window where I was pain free for the first time in over four years.  "With each practice that pain-free window opened more and more.  "I found myself practicing six days a week, sometimes twice a day to alleviate the pain.  "Initially I came to yoga for my back pain, but I found it helping all of the issues I was dealing with including the brain injury.  "My memory improved, the depression was lifting and about six months into practice I was out of pain and shedding the many medications. "That's when I decided decided I needed to teach this yoga. "I remember thinking: How do people not know this?"
Almost exactly two years after Marc began his practice, and as he continued to heal, Bikram granted him a full scholarship to attend teacher training.  Marc's successful completion of this very strenuous (physically, mentally, and emotionally) training course in the fall of 2008 overcoming- against all odds the limitations, and memory issues of the brain injury was proof of his healing.  Upon returning from training, Marc began teaching at the Bikram Yoga Sandy studio, subsequently managed and taught at the Bikram Yoga Ogden studio for the summer, and then in the fall returned full-time to Sandy.  He now also teaches at Bikram Yoga S.L.C. since April 2012 and offers personal Health/Wellness & Anxiety/Depression coaching. "If someone had told me 10 years ago that I was going to be teaching yoga and coaching others, I would have laughed. . . but here I am. "I teach yoga because it works.  " I teach it because it helped give me my life back."
Marc enjoys Boarding (snow, wake, and surf), Cycling (road and mountain), rock climbing, hiking, backpacking, mixing underground dance music, and generally having a good time.   He says, "Don't be afraid of dying.  "Be afraid of not living!"
Posted by The Baumanns at 10:00 AM