Tip of the Week: Which Nostril Are You Breathing Through?

Juls had a simple tip the other day in class for helping us to focus on our breathing when lying in Savasana. She said that rarely do we breathe through both of our nostrils at the same time. When you're lying on the mat feeling the air going in and out of your nostrils, can you tell which nostril is taking the air in? See if you can tell the next time you're lying in Savasana to help focus on your breath. Below is an article called "How We Breathe" from the  Complete Wellbeing website. 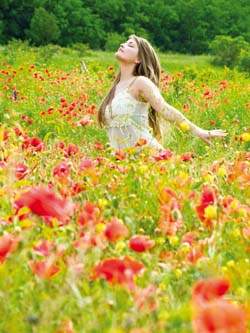 Contrary to popular belief, we seldom breathe through both our nostrils. When we take a breath, there’s no doubt in our minds that the next breath will come. Similarly, there’s also no doubt in our minds about the way we breathe [actually we hardly ever give it a thought].
That’s why it comes as a big surprise to know that we seldom breathe with both our nostrils simultaneously. According to Yoga, Ayurveda and some solid research, most people—about 85 per cent of people—breathe with only one nostril at a time.

In the eastern parts of the world, this has been an ancient discovery. There’s even a body of yoga dedicated to it called Swara Yoga.
As per Swara Yoga, we breathe through both nostrils only for a brief period during the day. The rest of the times, one nostril is dominant than the other in breathing, and while that is happening the other is recessive. Each nostril is dominant alternatively; the switch typically happens every four hours or so.
In the recent times [in 1895], Richard Kayser, a German nose specialist was the first to notice this breathing cycle.

The change of breathing pattern from one nostril to the other happens in an interesting manner. An erectile tissue present in the nostril [which most people are unaware of], gets swollen to block it.
At the same time, the swollen tissue in the other nostril returns to normal opening up the nostril. The swelling and contraction happen gradually and for the brief period when the switch is on, we breathe through both nostrils. We also do so at dawn and dusk.
Also, usually we breathe through the same nostril every morning, for three consecutive days, after which, for the next three days, we breathe through the other nostril. This periodic alternation of the nostrils maintains the balance of our system.


How it affects us

Although the alternate breathing is natural, sometimes it does not happen as smoothly as it is meant to.
According to yogis, this causes behavioural and health problems. To regulate this imbalance, yoga prescribes pranayama techniques like Anulom Vilom or Nadi Shodhana, which involve deliberately breathing through alternate nostrils by blocking a nostril with your thumb.
Posted by The Baumanns at 1:16 PM