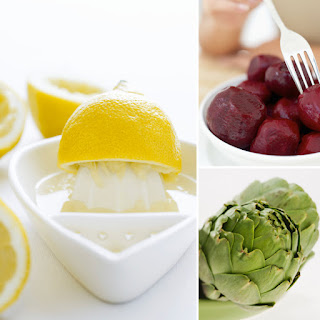 Need to do a little "spring cleaning"? Now is the perfect time to flush your system of the indulgences of the last few months so you can feel vibrant and alive during this beautiful spring season.

Of course one of the best ways to detoxify your body is by sweating and twisting it out in Bikram yoga. But eating clean and adding detoxifying foods to your diet in addition to practicing Bikram yoga could really give your body a fresh new start.

Here are 10 healthy foods by Michele Foley from FitSugar. In addition to cutting out alcohol and refined sugar, including these 10 healthy foods with natural cleansing properties are a great way to detoxify your body.

Think beyond delicate tea sandwiches and throw some peppery watercress into your next salad. It keeps free radicals away from your cells, helps energize cleansing enzymes in the liver, and is a natural diuretic.

Lemons are a great source of vitamin C, which is known to help the body detox and burn fat. Dr. Frank Lipman recommends drinking water with lemon every morning as a way to alkalize the body and help with digestion.

There's a ton of ways to get leafy greens into your diet — eat them raw, throw into a broth, add them to juices, or sauté them with a touch of olive oil. Leafy greens boost chlorophyll levels in the digestive tract, which helps the body get rid of environmental toxins like smog and herbicides.

The one thing I am eating a lot of right now is fruit; full of vitamins, antioxidants, fiber, and just about any other good thing you can name. After filling your body up with butter and booze over the holidays, I can't think of a better way to make amends than with a big ol' fruit bowl.

Not only is cabbage is eaten in many cultures for luck and prosperity around the New Year, it's also known for its liver cleansing properties. Mix cabbage, apples, and caraway for a crisp treat for your palate and your liver.

Numerous studies show that artichokes promote healthy liver and gallbladder function. They're also loaded with cynarin, which helps increase bile production, prevents indigestion, and stimulates healthy digestion. If you're looking for a natural detox food, artichokes are a major winner.


Beets
When I was having issues with my gallbladder, my doctor told me to load up on beets. Fiber in beets help increase the production of antioxidant enzymes in the liver, which help the liver and gallbladder eliminate bile and other toxic substances from the body.

Ginger and garlic are good friends to the liver because they help it get rid of free radicals that are built up in the body. Make yourself a healthy stir-fry and don't be shy to season it with these two liver-loving foods.

You definitely want to be drinking a lot of liquids right now, and green tea is a great choice. It's high in catechins — a flavonoid — which speeds up liver activity and increases the production of detoxification enzymes.

Choosing whole grains over refined grains should be a part of any diet — detox or not. Besides being full of nutrients and antioxidants, they're incredibly high in insoluble fiber, which helps keep you regular. If you're trying to flush the body of toxins, the last thing you need is to be bloated or constipated.

Floyd Mayweather Jr. takes center stage at media day for his May 5 bout in Vegas

Floyd Mayweather Jr., who, if you believe him, hasn’t stretched before lifting, running or training for the entirety of his 16-year professional career, is now doing Bikram yoga.

As the featured attraction of the circus that descended Tuesday on Mayweather Boxing Gym just southwest of the Strip, Mayweather (42-0) performed his media duties with a smile and went several rounds with the packs of reporters there to preview his May 5 fight against Miguel Cotto (37-2) at the MGM Grand Garden Arena.

Before going through a workout, the topics covered the gamut, from his impending incarceration and potential fight with Manny Pacquiao (no news on that front) to the Cotto fight itself. That includes Mayweather’s new yoga training, something he said he’s been interested in for the last five years but only recently started doing. “I think I can push myself and perform a lot better with yoga,” Mayweather said.

The decision could have at least something to do with finding a way to battle age. Mayweather, 35, said he’s never pulled a muscle in all of his non-stretching years, a claim that doesn’t pass the smell test. Bikram yoga is performed in a room heated to about 105 degrees, which allows for deep muscle relaxation. Mayweather said he even has his yoga trainers occasionally come to his house to work on more stretching.

All of that, he believes, is going to help give him the advantage over 31-year-old Cotto, a bigger fighter that Mayweather said he sees as being undefeated.