Tip of the Week: Best Postures for Balancing Hormones

All of your feelings and emotions are a result of chemical reactions taking place in the body.

These reactions are responsible for making you feel negative emotions, like anger and sadness, as well as positive emotions, from hormones like endorphins of love and happiness.

Endorphins and serotonin are two of the six main neurotransmitters produced naturally by the brain. They are responsible for regulating mood and brain chemistry. At high levels, they prevent pain and sadness, while low levels tend to inhibit positive feelings.

The pitutary gland produces endorphins, while the thyroid  gland produces serotonin; production of the two chemicals is often related so that elevating endorphin levels can produce a natural rise in serotonin levels.

While both endorphins and serotonin are known for enhancing emotions, serotonin produces a milder effect, causing happiness and feelings of security. Endorphins, on the other hand, are a more intense form of pleasure, sparking more extreme feelings such as euphoria and ecstasy, through to relaxation and joy, similar to those produced by serotonin.
The amounts of endorphins and serotonin in circulation in the body are different for everyone. Research shows that these feel good ‘happy hormones’ are significantly impacted by physical activity.

Regular exercise like Bikram Yoga, not only helps keep the heart healthy and gets oxygen into the body, but it helps in the reduction of stress hormones and increases mood-enhancing chemicals (endorphins), which help us cope better with stress.

Bikram Yoga’s twenty-six posture and 2 breathing exercises systematically move fresh, oxygenated blood to one hundred percent of your body, to each organ and fiber, restoring all systems to healthy working order. Bikram’s Beginning Yoga Class is designed to scientifically warm and stretch muscles, ligaments and tendons, in the specific order in which they should be stretched. The result is not only a health body, but also a health mind.

As Bikram yoga helps regulate the endocrine system, the hormone powerhouse of the body, it is the perfect activity to help reduce stress and increasing general wellbeing.
Every posture in Bikram has its benefits, each working together to re balance the body to optimum health. Below are a few of our favourites for hormone regulation along with the other benefits of these poses.


Bikram Yoga is designed to systematically work the entire body. The complete sequence practiced regularly will improve wellbeing and as a result enhance that ‘happy hormone’ high we all love.

Article by Jade Hall on naturalbeautyexpert.com
Posted by The Baumanns at 1:28 AM 0 comments

Tip of the Week: How to Avoid Yoga Injuries

The following article on greatist.com has some important advice for avoiding yoga injuries. Although some of the postures described aren't practiced in the Bikram series, much of the information can still be applied to your Bikram practice. For example, spreading your fingers wide in Locust Pose will help to avoid wrist injuries. Keeping your elbows tucked in to your sides will help prevent undue stress to your wrists and elbows in Cobra Pose. 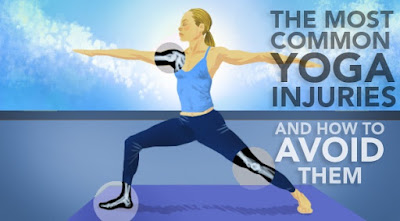 The Most Common Yoga Injuries and How to Avoid Them

More than 20 million people are down-dogging across the U.S. these days, pressing heels to mats in an attempt to reap yoga’s much-touted health benefits. Among them: improved strength and flexibility, reduced tension, anxiety, and stress, and maybe even lower blood pressure . Research has also found that yoga can improve respiration, heart rate, and metabolism and help reduce pain . But this doesn’t mean that yoga, if performed incorrectly, can’t also cause harm.


Pain in the Asana — The Need-to-Know

While most yoga injuries aren’t severe and go unreported, more serious issues do occur, including strains and sprains, fractures, dislocations, and, in rare cases, bone spurs, sciatic nerve damage, and stroke. But according to yoga experts, injuries can happen any time, in any sport, or even walking down the sidewalk — and scary injuries are rare. Most yoga injuries develop gradually over years of consistent over-stretching and misalignment . As with any physical activity, the safest approach to yoga is to learn how to practice the poses correctly and stay in tune with your body to avoid overdoing it.

To get the lowdown on the most common yoga injuries and some specific tips for addressing them, Greatist spoke to yoga instructors Steven Cheng of Yoga Union in New York, Julie Skaarup of Sol Yoga in Frederick, Maryland, and Jeni Livingston of Body Space Fitness in New York. Read on for their injury RX — from head to toe.

Proper alignment in poses is key, but it’s not the only factor in a safe yoga practice. To stay blissed out instead of stressed out over injury, follow the basic guidelines below.

Tip of the Week: Tone Your Arms 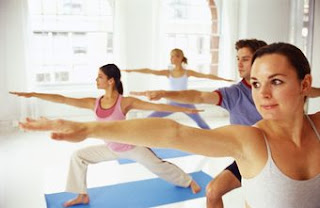 To get nicely toned arms from your Bikram practice, set your intention before class to engage your arm muscles as tightly as possible as the dialogue dictates. By paying slightly more attention to the isolation of the arm muscles used when holding a pose, you’ll reap the rewards of stronger, nicer looking arms!

With every posture you will be using your arms one way or another, but here are some postures to give extra consideration while engaging your arm muscles:

Posted by The Baumanns at 8:11 PM 0 comments

Tip of the Week: Mental Tricks to Push Yourself in Class 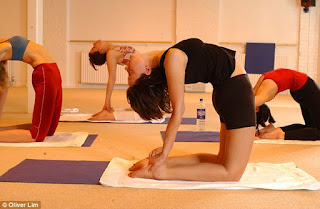 It is easy to become daunted when you start feeling tired or stiff at the beginning of class and know you have 90 minutes to complete. Try practicing mindfulness by focusing on the posture at hand without thinking of the rest of the postures you know are coming. Be present to the body, aware of the breath, and non-judgmental about the asanas, the mind chatter, the instructor's voice...

2 Have a reason for practicing yoga other than wanting to look good.

Sure, having a great looking body is a nice side effect of Bikram Yoga, but for a lot people, “wanting to look hot” isn’t something that they’re actually emotionally connected to. For many people struggling with poor body image, thinking about how good they are trying to look can bring up negative thoughts that actually stop them in their tracks when trying to push themselves harder. Try focusing instead on reasons for exercising that genuinely make you feel good about yourself, like wanting to get stronger or to test your own limits. This is the kind of thinking that will help you power through when your muscles are shaking and you’re pretty sure you can feel your heart in your esophagus.

Having a mantra of some kind will keep you focused … and keep you going in the toughest stretches of a posture. It will also help keep your mind occupied and away from thoughts that will slow you down: “Is this over yet?” “I’m so stiff.”
Start mentally saying some short, rhythmic phrases to yourself until you have a few that work for you. You don’t have to tell anyone what they are, or even that you’re using them. Some ideas are: "I am present". "I am strong". "Lock the knee". "A tight muscle is a light muscle". For more on mantras, read "Tip of the Week: Yoga Mantras".

4 Set your intention for something specific in class

It’s fine and good to say you’re going to work really hard in class today, but the reality is that working hard is, well, hard. It’s only natural that, as soon as you hit that first wall, you’ll decide that you’ve done enough and then want to lay down on your mat for the rest of class. Setting your intention at the beginning of class for something specific to work on such as breathing only through your nose, keeping your knee locked in the balancing postures, or pushing your hips forward in camel pose will help to keep a goal in mind to push you when you otherwise would want to give up. For  more on setting your intention, read "Tip of the Week: Set Your Intention".

5 Find something specific you like about the sensations you're experiencing.

This may come as a shock, but nobody is actually making you do Bikram Yoga. You’re doing this because on some level, you enjoy it. Remember that. Consider what you “like” about a hard, sweaty practice. Try to appreciate the sensation of shaking muscles during Awkward Pose, knowing this will cause your muscles to grow stronger. Enjoy the way your muscles feel when they are stretching to their maximum edge in Head to Knee and Stretching Pose rather than thinking of it as "stiffness and pain". Maybe this is the one time in your day when you’ll be away from your computer, kids, and all the craziness in your cluttered mind, and you enjoy the feeling of a calm and emptied mind during savasana. Think of how good you feel after you've "sweat it all out" for 90 minutes in a hot room.

6 Feel grateful for your practice.

It’s easy to forget, when you’re exhausted after class, that practicing yoga is a privilege. Some people have physical limitations that keep them from being able to move and stretch their body the way you can. Some people aren't able to stand or walk, let alone balance on leg. You are so lucky you get to hold Locust Pose for so long and get to do Roxanne's 2 minute Camel Challenge!
Posted by The Baumanns at 7:33 PM 0 comments