Tip of the Week: Break Out of Your Comfort Zone 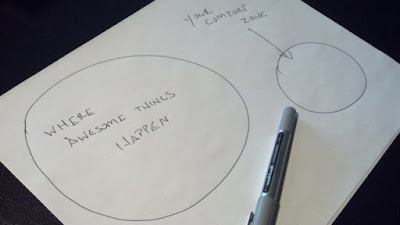 Breaking out of your comfort zone can be a scary thing to do whether it's meeting someone new or trying Toe Stand for the first time. But pushing yourself to try new things can have so many benefits as the following article by Alan Henry on lifehacker explains.

The Science of Your "Comfort Zone," and Why It's So Hard to Leave It

You've seen inspirational quotes that encourage you to get out and do something strange—something you wouldn't normally do—but getting out of your routine just takes so much work. There's actually a lot of science that explains why it's so hard to break out of your comfort zone, and why it's good for you when you do it. With a little understanding and a few adjustments, you can break away from your routine and do great things.

It's important to push the boundaries of your comfort zone, and when you do it's kind of a big deal. But what is the "comfort zone" exactly? Why is it that we tend to get comfortable with the familiar and our routines, but when we're introduced to new and interesting things, the glimmer fades so quickly? Finally, what benefit do we derive from breaking out of our comfort zone, and how do we do it? Answering those questions is a tall order, but it's not too hard to do. Let's get started.


Simply, your comfort zone is a behvioral space where your activities and behaviors fit a routine and pattern that minimizes stress and risk. It provides a state of mental security. You benefit in obvious ways: regular happiness, low anxiety, and reduced stress.

The idea of the comfort zone goes back to a classic experiment in psychology. Back in 1908, psychologists Robert M. Yerkes and John D. Dodson explained that a state of relative comfort created a steady level of performance. In order to maximize performance, however, we need a state of relative anxiety—a space where our stress levels are slightly higher than normal. This space is called "Optimal Anxiety," and it's just outside our comfort zone. Too much anxiety and we're too stressed to be productive, and our performance drops off sharply.

The idea of optimal anxiety isn't anything new. Anyone who's ever pushed themselves to get to the next level or accomplish something knows that when you really challenge yourself, you can turn up amazing results. More than a few studies support the point. However, pushing too hard can actually cause a negative result, and reinforce the idea that challenging yourself is a bad idea. It's our natural tendency to return to an anxiety neutral, comfortable state. You can understand why it's so hard to kick your brain out of your comfort zone.

Even so, your comfort zone is neither a good or bad thing. It's a natural state that most people trend towards. Leaving it means increased risk and anxiety, which can have positive and negative results (which we'll get to in a moment), but don't demonize your comfort zone as something holding you back. We all need that head-space where we're least anxious and stressed so we can process the benefits we get when we leave it.

What You Get When You Break Free and Try New Things


The benefits you get after stepping outside of your comfort zone can linger. There's the overall self-improvement you get through the skills you're learning, the new foods you're trying, the new country you're visiting, and the new job you're interviewing for. There's also the soft mental benefits you get from broadening your horizons.

How to Break Out of Your Comfort Zone

Outside your comfort zone can be a good place to be, as long as you don't tip the scales too far. It's important to remember there's a difference between the kind of controlled anxiety we're talking about and the very real anxiety that many people struggle with every day. Everyone's comfort zone is different, and what may expand your horizons may paralyze someone else. Remember, optimal anxiety can bring out your best, but too much is a bad thing.

Here are some ways to break out (and by proxy, expand) your comfort zone without going too far:

You can't live outside of your comfort zone all the time. You need to come back from time to time to process your experiences. The last thing you want is for the new and interesting to quickly become commonplace and boring. This phenomenon, called hedonistic adaptation, is the natural tendency to be impressed by new things only to have the incredible become ordinary after a short time. It's why we can have access to the greatest repository of human knowledge ever created (the internet) at our fingertips (on our smartphones) and still get so bored that all we think of is how quickly we can get newer, faster access. In one way it drives us forward, but in another it keeps us from appreciating the subtle and the everyday.

You can fight this by trying new, smaller things. Ordering something new at a restaurant where you get the same thing every visit can be eye-opening the same way visiting a new country can be, and both push you out of your comfortable spaces. Diversify the challenges you embrace so you don't just push your boundaries in the same direction. If you've been learning Latin-based languages and you find yourself bored, switch gears to a language with a completely different set of characters. If you've taken up running, instead of just trying to run longer and farther, try challenging yourself to run on different terrain. You still get the challenge, but you broaden your horizons in a different way.

Take It Slow, and Make Stretching Your Boundaries a Habit Of Its Own

The point of stepping out of your comfort zone is to embrace new experiences and to get to that state of optimal anxiety in a controlled, managed way, not to stress yourself out. Take time to reflect on your experiences so you can reap the benefits and apply them to your day to day activities. Then do something else interesting and new. Make it a habit if you can. Try something new every week, or every month. Our own Adam Dachis has committed himself to doing something weird and new every week, just to test his boundaries.

Similarly, don't limit yourself to big, huge experiences. Maybe meditation pushes you out of your comfort zone just as much as bungee jumping. Try the former if you've already done the latter. The goal isn't to become an adrenaline junkie—you just want to learn to learn what you're really capable of. That's another reason why it's important to return to a comfortable state sometimes and just relax. Just don't forget to bring back as much as you can carry from those inspired, creative, productive, and slightly uncomfortable moments when you do.
Posted by The Baumanns at 11:58 PM 0 comments

Tip of the Week: Set Up for Triangle Pose 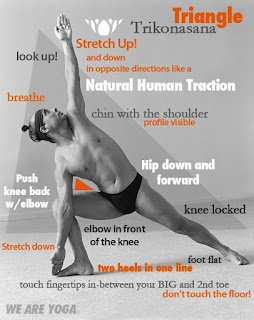 The seemingly minute details of setting up for Triangle Pose (Trikonasana) will assist greatly with your alignment.  Setting up properly will help with the integrity of the posture and ultimately make it easier and more comfortable for you.  Once that "muscle memory" is there it will be easier from then on, so it really is worth the work at the beginning.

Here are some key points to remember in the set up:

Now you are ready to move into the posture.

To get the alignment in Trikonasana, imagine that you’re doing the exercise between two walls, one at your front and one at your back, that are closing in toward each other. If your hips are too far back, you tend to lean forward and get thrown off balance. If you push your hips too far forward, your upper body goes too far back and you backbend instead of extending the spine.
Posted by The Baumanns at 4:10 PM 0 comments

Tip of the Week: Yoga and the Autonomic Nervous System

We have all heard that if we are stressed we should try yoga. Us type A personalities (yes I am a type A personality and used to be way worse before yoga!) may not be able to understand how 90 min in a hot room can help our stress level.  In fact, one might argue 90 min not working or being productive probably would stress them out even more right?—wrong!  Yoga does help with stress.   Stress is connected to the Autonomic Nervous System.  Yoga helps with stress by making our Autonomic Nervous System more efficient.

Let’s go back to the basics first:

Our autonomic nervous system really developed back when we evolved from apes into the species we are now, Homo Erectus.  Back then we had 3 concerns: eat, sleep, and don’t get eaten.  Therefore our bodies were programmed with hormones to help us seek food when hungry, sleep when tired, and gather all our energy when faced with a stressful situation such as encountering a bear.

We still face situations that stimulate our Sympathetic Nervous System (the fight or flight system), they just aren’t in animal form.  Today our stresses come in the form of work deadlines, traffic jams, and juggling kids soccer practices.  In fact, our lives have become so full, “stresses” often occupy our minds leaving us perpetually in fight or flight response.  What makes this even worse is fight or flight will triggers fight or flight.  It is a positive feedback loop and without conditioning your parasympathetic system to take over, your body begins to be in a constant state of stress.

How does Yoga Retrain the Autonomic Nervous System?

From mastering health and fitness
Posted by The Baumanns at 4:19 PM 0 comments

Tip of the Week: First Part of Awkward Pose 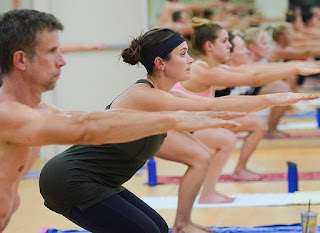 Tips to Consider for the first part of Awkward Pose:

1. Especially with newer students, the shoulders tend to lift and shrug upwards in the pose. Make sure your shoulders are DOWN away from your ears with your arms stretching forward.

2. Oftentimes students will lift their chin up when the teacher says to do backward bending. So rather than lifting your chin up, keep your chin level and think "Upper body up". You want to use your back muscles instead of your neck muscles.

3. Keep your stomach sucked in with the abs engaged the entire time!

4. Sit down until your hips touch the invisible chair. Most beginners don’t sit down low enough because they feel funny sticking their buttocks out behind them. It will feel very strange the first time you sit down all the way but it will help to increase flexibility in your hips. Sit too low, and you cannot lift your chest up and bring your upper body back, so that your total spine is backward bending. You basically want your upper legs to be parallel with the floor.

5. To go deeper in the posture you aren’t trying to sit lower. You are trying to lean back and fall down backwards.

Click "here" for more information on the first part of Awkward Pose.
Posted by The Baumanns at 4:34 PM 0 comments