Bikram Yoga SLC student eVette Raen was recently featured in an article by GE. We are so proud of you eVette! You are a great inspiration to us all. 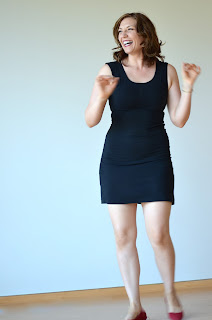 Source: Communications
Story Highlights:
What counts as a challenge? It's different for everyone, but it always means setting a goal above and beyond your ordinary. For some of us, a fitness challenge might be taking a dance class for the first time. For some of us, going to the gym twice a week. When eVette Raen decided to challenge herself she was already attending an very demanding yoga class, so she chose to go for 200 sessions in 200 days.
Among the manufacturing, service and engineering personnel at her site in Salt Lake City, eVette is quality assurance analytics manager on the C-Arms for the OEC 9800, a fluoroscopic machine that allows surgeons to see an internal x-ray video image of their patient, which allows them to make incisions that aren't as deep, so their patients can recover faster.
Over the span of her three years at the site, eVette credits HealthAhead with bringing her to a new level of health and fitness. She was an athlete in high school and kept up with her active lifestyle, going to the gym a couple of times a week, but she just wasn't into it. What turned things around for her was joining exercise classes and groups at her site. As she says, "If I just work out on my own, I'm prone to quit after fifteen minutes. If I even go."  Now she regularly attends yoga and a variety of other aerobic workouts. "It's a social group of people. Once I get there I know that I'm committed for the length of the class." 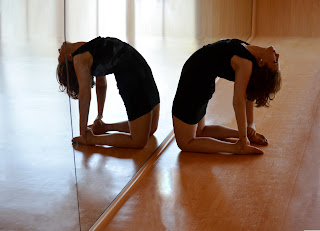 Thus, after two years with the positive influence of esprit de corps and healthy new food and nutrition habits she learned at weight management program at her site (paid for by GE), eVette found she was working out more, enjoying it more, and had lost forty pounds in the process.
In the course of her new class-oriented fitness routine, eVette had started attending an especially challenging "hot" type of yoga, which is done in a humid studio at 105 degrees.
So to keep things interesting, she gave herself a 30-day challenge. She met that challenge, then made a new one: A hundred sessions in a hundred days.
Now eVette had also been reading yoga philosophy, and a section on testing one's determination struck a chord with her. The idea is to take a goal that's challenging yet attainable and then double it. So eVette found herself embarking on the challenge of 200 hot yoga sessions in 200 days. "I was a little fearful at first doing that and I thought about it for several days," she said. "But right now I am on Day 67 and this afternoon when I practice I will be on practice 74, so I'm already ahead." 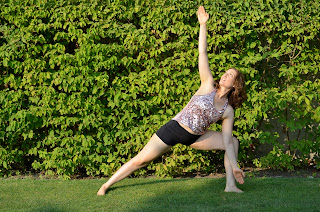 Our yogini hero is already ahead because she occasionally does multiple sessions in a day. In fact, one day this summer eVette logged four sessions, spending an unheard-of six hours in hot yoga over the course of the day. "People think I'm a little crazy, but I've really worked up to that," she says. "I like to think of it just as people train for marathons, I've done the yoga for so long and I'm so used to the environment."
But for eVette it's not just about losing weight, keeping busy, or even being fit. "Besides just the physical practice of it, the yoga reduces stress and makes me feel much mentally stronger," she says. In the pursuit of more of the intangible benefits, she has recently added Yoga Nidra to her routine. "Basically I go and lay down on a yoga mat in a class and the teacher leads a visualization that's all about body awareness and what you want in your life." What better complement to 200 days of heat and effort. Om shanti, eVette.
eVette's tips for a well-balanced fitness plan: 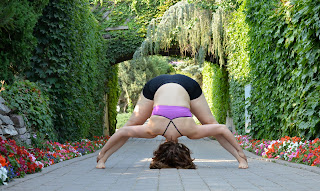